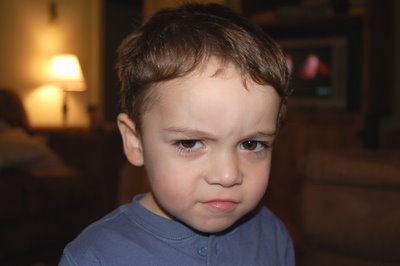 There are always little things going on around here even when nothing big is happening. That's how the last few days have been. We're still trying to get everything straight from the holidays and to get back into a routine.

The first photo today is just Jonathan. If you know him, you know this is definitely him. Now I'm fast enough to catch him!

One of the little things today was the fact that I pulled out the new shoes Nana and Papa bought Jonathan back when we were at the beach. He is used to his red shoes. He kept saying, "I want shoes. Shoes dirty." Which really means I DON'T want shoes. He's good at leaving out that don't part. Anyway, since his new shoes are black instead of red, it took some convincing that the shoes were not dirty before he would wear them. 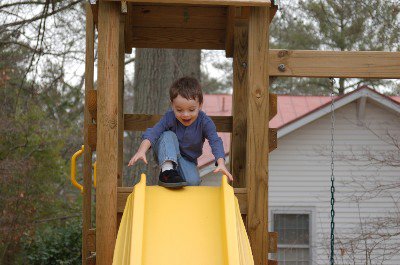 He also had fun outside today (since it is like 65 degrees) feeding Henry bones, playing on the slide and in the sandbox, throwing and kicking a beach ball around that we found in the trees, and running. Actually he started running and he just headed down the road. I caught up, and he ended up running all the way around the block. Then we went to the cemetary and he ran and ran. You would think he'd been tied up or something.

Oh yeah, the only way I could get him to eat a real lunch today (something besides cereal) was to let him sit on the table. I don't understand him, but some things just aren't worth fighting. So if we come to your house to eat, and Jonathan wants to sit on your table, you now know why.
Posted by Crystal @ A Well-Feathered Nest at 3:01 PM