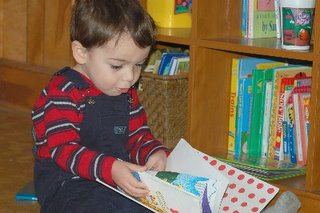 Jonathan has always liked books. I wonder Where he got that from? He did go through a period when he wasn't as into them as he once was, but lately he has been over that. From the time he was really small he would sit and turn the pages in books. Then he would usually try to destroy them. We had to watch for that. Now he likes to flip through books that we have read with him, and he "reads" the pictures. His latest favorite is "The Bike Lesson." He found this one at Grandma's house, and she let him bring it home. He reeeeaally likes "The Bike Lesson."

Usually when he gets really quiet it's important to see what he's up to. Generally he is emptying all the wipes out of the box, dumping stuff out of the drawer in the baker's rack, shaking all of the pepper out of the shaker onto the kitchen table, or he's found a deck of cards he can throw every where. Yesterday he was sitting in the kitchen "reading." We escaped disaster this time!

Oh, and he's learning about possessives. Just the other night, when I was putting the pepper shaker back out of reach, he said, "That's Jonathan's." Well, it was grammatically correct, but no way am I giving that kid the pepper shaker. I've had to buy way too much pepper in the last year. Maybe he'll settle for an old one in the sandbox.
Posted by Crystal @ A Well-Feathered Nest at 8:38 AM