Do you remember that song by Jars of Clay? It was catchy and I think it's actually buried somewhere in my MP3 player. Anyway, this isn't really about the song--but our house.

We seem to be keeping ourselves busy, and it seems like I've been saying the same thing on here for over a year now--one big apology about how busy we've been. I'll try to skip the apology and just recount a little of what's been happening.
The week before last, Jonathan and I left after BSF, and went to Nana and Papa's house. I dropped him with Nana, and then I met Tonya in Greensboro for a warehouse sale. I was really going this year mostly to humor her because the teaching stuff I really need is books, but last year the books were still around 3-5 dollars. I didn't think I'd buy anything, but I ended up with 33 books (yes I said 33) covering all sorts of standards for preschool through 3rd grade. Oh, yeah. They were all $1 except for 1, so that was too much to pass up!! Anyway, it will help e convince Justin we don't need a big boxed curriculum when we go to the Homeschool conference in a few weeks. 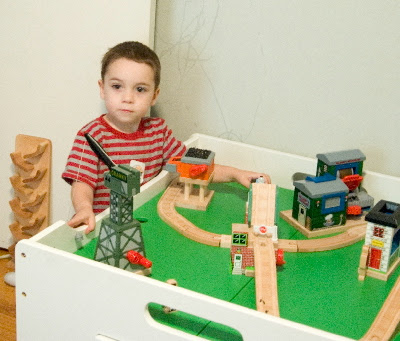 As you can see from this pic, Jonathan got his first real summer haircut. It seems funny because his hair has never been so short before. We used the clippers and buzzed that mess right off. He looked in the mirror and said he looked like Jonathan with no hair. Then he said he looks like Ethan.
On Tuesday, Jonathan went with Mama and Grandaddy to their house while Justin took me for a little overnight treat in Raleigh for my birthday. We finally got to eat at Carrabas which was sooooo good even if it was a bit on the pricey side. We had dessert at Goodberry's (Justin's favorite) and stayed at a hotel in Wake Forest. On Wednesday we did a little shopping and headed home. I, once again, was reminded that online shopping is best for me. I know what I need. I find the best deal on it, and I usually save money by paying shipping rather than gas! Then I'm also not tempted by all the other stuff out there.
Of course, we had BSF again on Thursday, and I spent Friday making sure everything around here was pretty clean, so I could spend some time scrapping for National Scrapbook Day which has really turned into a weekend! I had fun on Saturday and Sunday working on pages and doing some challenges at my favortie scrapbook store scrapsupply.com. I even won a few things in the process!
So here we are. It's Tuesday again, and things are being cleaned up from the neglect over the weekend. I was reminded again yesterday why I don't go to Wal-Mart when I attempted to do just that. There is no reason it should take 30 minutes to check out with $30 worth of stuff if it isn't a week before Christmas. 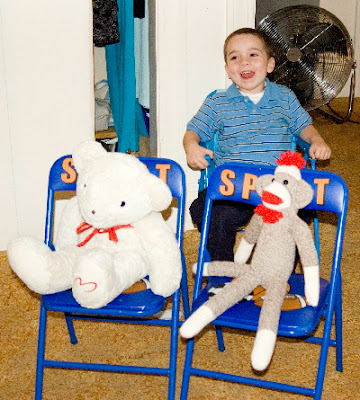 Jonathan has been keeping busy playing all sorts of things--hence the reason our house gets destroyed so quickly. You can see from this photo that he and his animals were watching a "movie" which was really a silly puppet show Justin was doing on the bed. It's funny how he sets this stuff up all on his own. The boys had gone to see Spiderman 3 on Saturday, so I guess he still had movie on the brain yesterday.
And then today, this is what we get from our only child. There was a card game going on in his bedroom. He always find someone to play with. And hey, Jerry bear can only hit back so hard when the fights break out!! 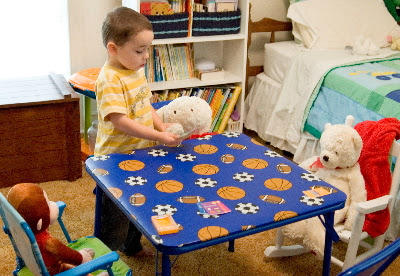 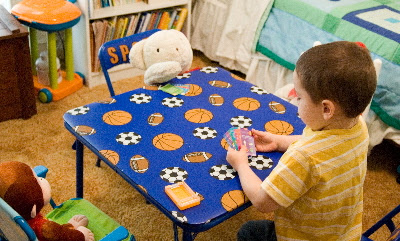 I guess that should just about catch everyone up!!
Posted by Crystal @ A Well-Feathered Nest at 12:33 PM