We're sadly mourning the loss of our den rug. You see, it's one of the few items we own that we were able to take time to seek out what we really wanted, liked, and then buy. I love that rug, and we can't get another one.

I guess it's a lesson in pride. I was proud of that rug. We were proud of the way it coordinated with our furniture in the den. (Literally the only other thing in our house that we were really able to choose what we wanted.) We looked forward to the day that our den decor would be at home on display in a light-filled room without gold carpet. Alas, that day will never come. That is unless a melted imprint of an iron is a fitting accent to the rug. I think not.

Apparently some sneaky person took the liberty--while I was in the shower yesterday--of going into our bedroom, taking the iron down off of the ironing board, taking it to the den, lying it down on the carpet, and plugging it in for a while. When I got out of my *might I add* quick shower, I thought I smelled something burning. By the time I made it to the den, the iron was unplugged, but it was completely melted into the carpet. Ugh. Justin was eventually able to get it up and peel the crust off of the iron, but we were left with a nice imprint in the rug. I guess it's good that it was a rug and not wall to wall carpet.

So now a new search will begin, and I'll add one more thing to my wishlist. Then I'll eventually get over it and move on. That is, until something else doesn't go exactly the way I want.

Oh, I do have a photo of the culprit. Whenever he sees me with the camera, he thinks he must be the subject, so I had to stop between photos of some gift tags and take one of him. Of course, then he wanted to see himself on the back. If only he wanted his photo taken when I'm actually trying to take it! 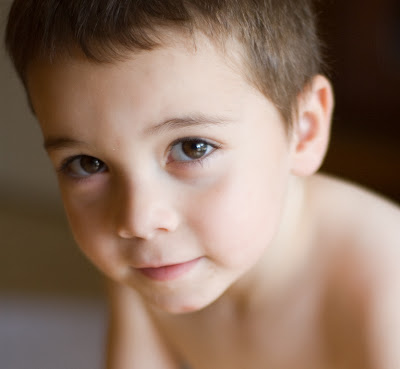 NOTE: We are very happy that no one was hurt. Jonathan has had a little run in with the iron before, and I thought he had learned his lesson. This whole thing involves so many thing he knew he wasn't supposed to be doing!
Posted by Crystal @ A Well-Feathered Nest at 8:45 AM