Jonathan has been waiting eagerly.

He wanted to know first thing when he got up this morning if it was time to go to the conference. He's been asking all day when we're going. He was disappointed when he realized Daddy wasn't bringing "the guys" here. You would think a four year old would have better things to think about than a conference on the Holy Spirit.


I'm not sure why he's so eager to go, although, it may have something to do with the fact that he knows there will be chocolate muffins there--and apple juice. To him, that sounds like something worth checking out. I have to prep him tonight for the fact that the muffins won't be in sight until tommorrow. So maybe we should have put that on the invitations instead: Free chocolate muffins and apple juice.
He is a bit funny because in the middle of the last little conference we had he wanted to know why no one else brought their children. I guess he's so used to being hauled around to things like that. He thinks it's normal.
He's also been "practicing" his piano. We use the term "practicing" loosely around here. He doesn't so much have a clue what he's doing. Plus, his fingers are way to small to really play, and he gets frustrated because he can't reach the pedals. Although it is a bit amazing how he can recognize music he hears and tell us where it's from. A little weird. That's all totally foreign to me.
Anyway, I know this is what you all are here for, so I'll go ahead and give you the pics. 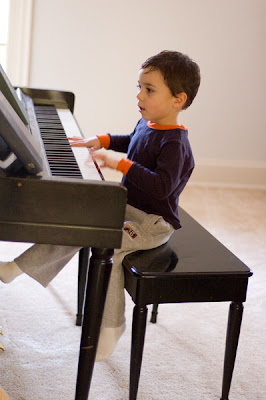 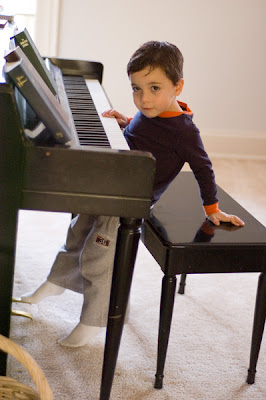 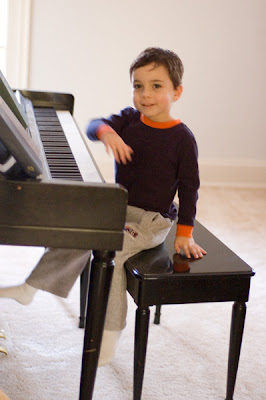 Posted by Crystal @ A Well-Feathered Nest at 4:12 PM