I guess it's been a while. We've been up to all sorts of things around here, but I'm not sure any of it has been all that exciting to blog about--just everyday stuff. Since I posted last...

- I got a haircut which was about 6 months overdue. Much better now.

- The boys went fishing, and I found our house under the piles that grew while I was sick.

- We took Jonathan to Raleigh to the Science Museum and the History Museum. His favorite part was still the room with the dinosaurs, although, he was scared of the sounds for a little while. We (or should I say Justin) shopped a few used bookstores while we were there, too. I'm trying to convince him our shelves can only hold so many commentaries.

- We made a little registry at Target.com mostly because we could get a $20 giftcard just for doing it. The gift card ended up being an actual nightlight. Jonathan likes it, and it's cool except that you have to carry it around in your purse until you spend it.

There's not much on our list, but we added a few things to represent the type of stuff we may actually need. I'm not sure some of the onesies will survive once I wash up all the tiny things. We found out car seats are only supposed to be good for 5-6 years from the time they are manufactured, so that's on the list. We're not too picky about any of it, but the Snugrides are supposed to have the best safety ratings of any infant seat for the price. As for strollers, I have no clue. There's too much out there, so I just added the ones that work with the seats. There are actually some better combo deals at Walmart, and we already have some gift cards for there anyway. The verdict is still out on the crib parts. He's not giving up just yet.

- We have had looots of rain and wind, so we have a yard covered with limbs, sticks, and pinecones. I guess I know what we'll be doing this weekend. You'd never know we're in a drought by the looks of the resevoir.

- We played mini golf on Saturday, but Jonthan thinks it's boring compared to the video games.

- I've learned that there are so many things that you can research and learn about to get ready for a new baby. I had no idea what I was missing out on the first time when we didn't have the internet. So far I'm intrigued by these ring slings that look like they'd be so comfy for little babies. And I totally love these mei tai carriers. And you can design your own!

I've also been doing some math and trying to decide if I'm brave (or crazy) enough to save a ton of money on disposable diapers and just how many people we would gross out in the process. The more I read, cloth doesn't seem as bad as I thought it would be, and there are some great deals out there on prefolds and covers if you don't let yourself get overwhelmed by all the other choices out there.

- Most of the other almost 5-year-olds are in the midst of kindergarten registration. We're simply gathering resources, and planning to work on and off through the summer to make up for any time we might lose after the new little guy is here. I've pretty much figured out that we just do no paperwork at this point. The state doesn't want to hear about him until he's turning 7.

- I waited at the doctor today 1 1/2 hours for a 5 minute appointment. At least they have some magazines I haven't read yet.

- We're having a no TV week this week. And we're threatening to extend it if Jonathan keeps asking about what comes on each night. The kid is addicted, and we're considering this intervention. Plus, it's pretty much a waste of time. We took him to play at Sonic with some of the other little fellows after supper tonight. And then the boys were playing games when we got back. I think Jonathan was learning to play war. Then they moved on to dominos. He likes to sneak a goofy face in every now and then. 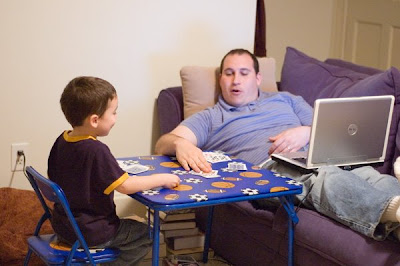 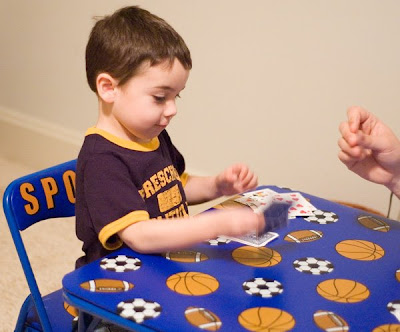 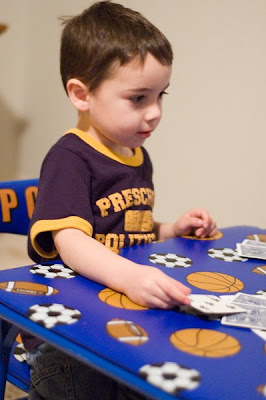 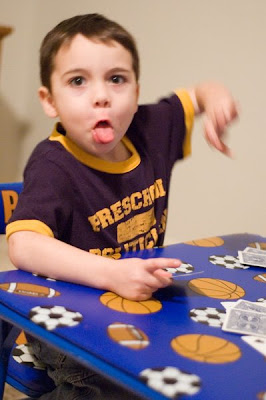 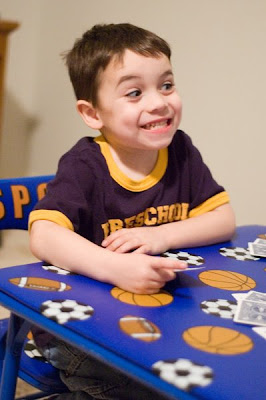 Posted by Crystal @ A Well-Feathered Nest at 9:05 PM