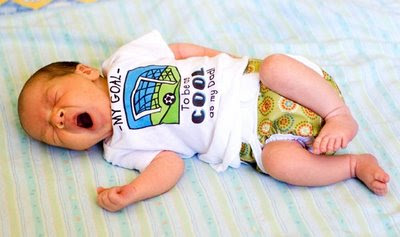 I thought I'd share a photo of my first real attempt at a cloth diaper on Benjamin. This was one day last week. I can't really remember since they sort of all run together a bit. I kept trying to practice folding things and getting the different sized prefolds and such on right. It seemed like every time I'd try it out, he would take the opportunity to pee. When he finally both peed and pooped in one, I realized I should probably just be putting them on him anyway.

I've been doing it most of the time at home except for night time. Justin hasn't really given it a shot yet, but we'll have to get him trained. So far I've only had a leak once and that was when I just trifolded a preemie prefold in the cover and he was sleeping. That's not the best combination, but it's all still an experiment at this point.

And that shirt...Jonathan picked it out at the hospital gift shop. I think he was mostly concerned with the soccer ball.
Posted by Crystal @ A Well-Feathered Nest at 9:32 AM