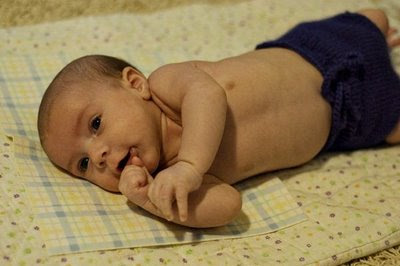 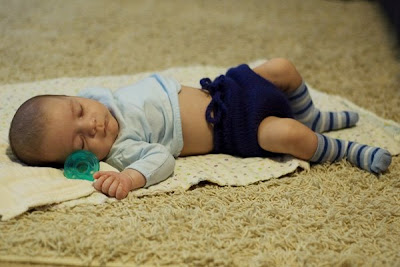 I don't really have anything catchy to say, but I'm trying to keep things alive around here. I thought I'd post a few photos of the littlest guy in his wooly soaker to keep the grandmas around.

We're mostly in the process this week of getting some things organized and planning to start kindergarten for real. It's a little scary, but I'm sure it won't be so overwhelming when we get in the swing of things. Jonathan is counting down the days until classical starts, but he says he's most excited for soccer to begin. We should probably find out just when that is.

I'm trying to get better about planning our meals so we don't end up eating as much prepackaged stuff and to try to squeak as much as possible out of our grocery budget. I've been going through some of the things I downloaded over at money saving mom. I found out about this site thanks to my friend Leah who posted about the information that's available over there a while back. I'm still pretty much in the organizational stages right now. I'm thinking of it as a sort of challenge to make it a little fun. We'll see how it goes.
Posted by Crystal @ A Well-Feathered Nest at 7:22 PM