Benjamin is getting so big, and he's got all sorts of tricks that he likes to do now. His most frequent feat is scooting. He can probably turn 360 degrees if you leave him alone on his back long enough. It seems he can only go clockwise, though. Another thing he does that gets him a bit frustrated at times is the climb. That's not really the best word for it, but it's the closest I could come up with right away.

He does this climb we put him tummy-down on the Boppy pillow. He will usually hold his head up and look around for a few minutes. Then he starts the climb. Sometimes he's less successful, and he ends up just sliding backwards with his face in the pillow. Other times he ends up in a much more precarious situation. He'll climb forward until he gets the front half of his body off of the pillow. This leaves him with his face in the carpet and his bottom up in the air on the pillow. He's not typically very happy about that.

Last night I was in the kitchen working on dinner, and I had left him right in place, tummy-down on the pillow. I heard a bit of cooing and gurgling from the den, and when I went back to check on him, he was on his tummy all the way off of the other side of the blanket from where he started. Now, granted, the blanket isn't all that big, but I was still impressed that he was able to get that far without getting stuck on his face like he usually does. He's made it over the pillow a couple of times, but I've never seen him get that far before. Maybe one day we'll get it on video, but I've been told we're out of tapes for the time being. 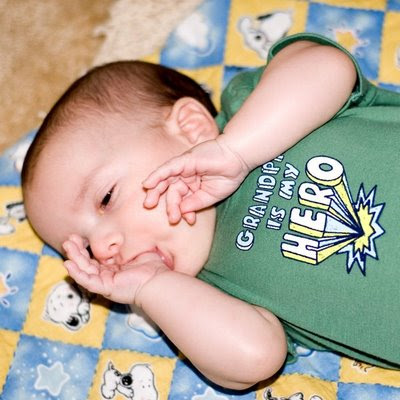 He's also apparently figured out that his thumb will make a good substitute for the pacifier. He still likes the pacifier better, but he'll take the thumb when it's the only available option. Sometimes he just sticks his thumb inside the hollow part of the pacifier, so he has both at the same time.
Posted by Crystal @ A Well-Feathered Nest at 5:22 PM