How to remove a tiny object from a preschooler's nose 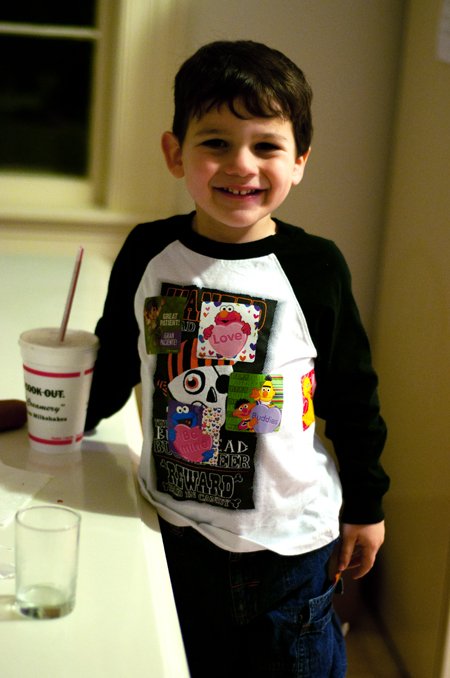 We had quite an adventure last week when Benjamin decided to stuff something in his nose while I was taking a shower.  From the bathroom, I could hear him yelling, “I can’t sneeze!  I can’t sneeze!”  After I quickly dressed, I helped him up onto my bed and inspected his little nose.

He insisted he had put a Lego up there, yet I could barely see something that night be it.  I don’t know how in the world it made its way up so high in his nasal cavity except that he had been sniffling some already that day.  I attempted to have him blow his nose several times, but it didn’t seem to budge.  One time he accidentally sniffed instead of blowing, and the object disappeared altogether.

Justin arrived home, and we started brainstorming any and all possible ideas to get this little thing out.  Neither of us is quick to head to the emergency room, not only because of the high co-pay, but also because of the crazy germs that it’s filled with this time of year.

After many attempts to get it out and calls to several different people, including his pediatrician, Justin trekked off with him to the hospital.  I knew I could survive better if I didn’t have to be there if he had to be restrained.  Judging by our attempts to get him to be still while we examined his nose, we had no doubt it would never come out without him having to be restrained.  Plus, we didn’t really want to expose the whole family to germs if we didn’t have to.

In the end, the visit was rather anti-climactic.  They were placed on the “fast track” as soon as they arrived, so they didn’t have to wait long at all (It could have been bad around 6 in the evening.).  Benjamin was met by a nurse who also happens to be a helper in his Sunday School class at our church, and he was very popular among all the workers there in the ER.  Then, Justin was actually the one who removed the object by following the doctor’s suggestion.

So here’s the trick:  The doctor had Benjamin lie down on the table while Justin pinched off the opposite nostril and blew into his mouth.  The tiny piece (which was actually part of a Kinex set) immediately flew out, and they were back home by 7:15.  In some ways we’ve felt silly because if we had Googled a bit more, we probably could have found this additional suggestion.  In other ways, we were almost hoping it wouldn’t be a pleasant experience, so he wouldn’t attempt to do this again.

Benjamin arrived home with a milkshake in his hand, and he proudly proclaimed, “I got stickers!”  As I looked at the six big stickers gracing the front of his shirt, I simply shook my head.  Living with little boys is always an adventure.

Disclaimer:  I am not a medical professional, and this post should not be construed as medical advice.  I’m just a mom who is sharing our experience in the ER.

Posted by Crystal @ A Well-Feathered Nest at 7:54 PM