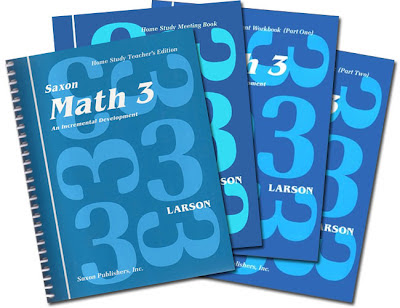 Math
The last time I wrote in detail about what we were doing in our homeschool, we were still using Math U See for our math curriculum.  While I do love the approach MUS has for basic operations, I found that it was leaving Jonathan very frustrated, and he was not loving math at all.  It didn't work well for him because we were basically focusing only on basic math facts, and there wasn't really anything else going on.

Once we switched to Saxon last year, Jonathan began to look forward to doing math.  Because Saxon is a cyclical curriculum, students move through a variety of skills while constantly reviewing the ones they have already done.  This keeps things fresh, but lets them really master the concepts.  For us, Saxon has worked really well for second and third grades.  My boys especially like the manipulatives and the hands-on activities.  I like that Saxon includes skills I would never have thought to touch on.

We have about 10 lessons left, and we'll be moving to 5/4 for next year.  I am eager to see how we transition to the higher level Saxon programs. 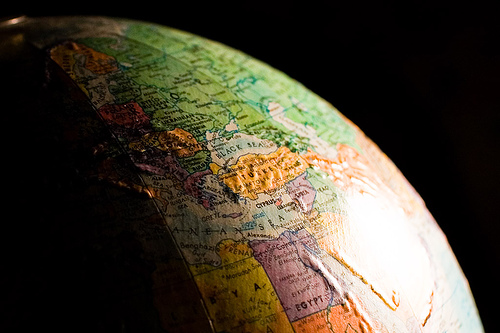 Geography
Because we pull our studies from the Classical Conversations cyclical materials, we work on different aspects of world geography each year.  This year, our focus has been on the United States.  We work weekly on being able to locate and identify the listed features.

One of my goals for this year has been to implement a routine to work on map drawing skills.  Jonathan has been working on the United States map beginning with tracing the outline.  We use the maps provided by CC in the geography notebook.  Over time, we have added the individual state outlines and then specific landforms and features that are on our memory work list for this year. The ultimate goal would be to be able to advance to drawing it freehand, so we will continue to work on the skills on a regular basis.

Much of what we do with our geography map drawing is based on the ideas discussed by Leigh Bortins in her book The Core.  I would consider it a "must read" for anyone who wants a good look at how to incorporate the classical model of learning into their homeschool.

Posted by Crystal @ A Well-Feathered Nest at 8:30 PM

Email ThisBlogThis!Share to TwitterShare to FacebookShare to Pinterest
Labels: homeschool, how we do homeschool